Each year in Telluride, Colorado there are many festivals to attend. In August they host the Telluride Mushroom Festival. Last year’s Mushroom Festival focused on the use of fungi as medicine for the environment and people. 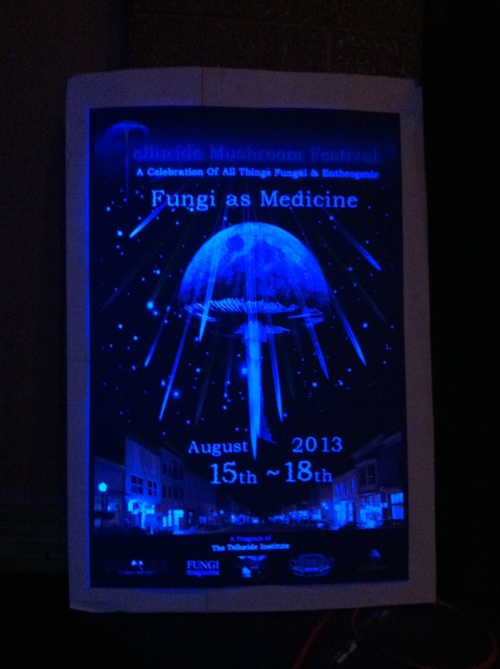 After seeing the documentary, ‘Know Your Mushrooms’ I was intrigued by the festival. I was surprised with a trip to the festival for my Birthday.

Attendees come from all over. For some it’s their first time, as it was for me and others it’s something they do each year. They show films, have booths set up for everything mushroom, have guided forays. It was a great experience. We chose a few of the talks that were about how certain mushrooms are being used in University hospitals to treat anything from cancer to strokes. We also got to hear about how they are using mushrooms to clean up oil spills and other environment issues.

The community gets involved and local Telluride restaurants will have Mushroom specials on their menus or Mushroom beers. Lots of great shops to visit in the area and also street vendors set up with different foods as well.

Some people who attend the festival will camp out at nearby campsites. We stayed at the Bear Creek Lodge and took the free gondola into Telluride when we wanted to go into town for the festival. Bear Creek Lodge had a full kitchen, so we brought a lot of our own food. They also had washer/dryer hookups in our room. It was like a very nice apartment.

We found some King Bolete’s that we foraged, cleaned and cooked to eat. The King Bolete is what most know as the Porcini Mushroom. There are so many different types of Mushroom’s as you will see in the images, that it takes a lot of skill and training to know which one’s are safe to eat. We only tried the one, that we knew for certain was safe.

Lunch at La Cocina de Luz, which was very good.

On the road to Telluride:

Some of the areas we foraged in:

In and around Telluride:

In the following video, you will hear Mycologist, Paul Stamets give a talk about how Mushrooms can save the world. It gives you a little idea why Mushrooms are so important to us and our environment.

Check out the program for this year 2014 Telluride Mushroom Festival.